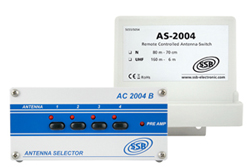 The antenna control system ACS 2004 allows the activation of four different antennas
for all amateur bands from 80m to 6m over a single feeder cable. It consists of the
control unit AC 2004 and the water protected outdoor unit AS 2004. Both devices
communicate over a single feeder cable, which additionally allows four independent
amplifiers for each antenna connection to be switched on or off independently.

For the first time a complete, sequential preamplifier control is built into such a
system, that, at the same time, controls also power amplifiers processes.
Preamplifiers and power amplifiers can be controlled by a PTT, balanced to
ground or to + 5…12V.

Up to four antennas can be connected to the input sockets of the antenna switch, which is mounted at the mast.

The AS 2004 head unit and the internal control unit AC 2004 are connected via the coaxial feeder.

The socket TRX (PA) has to be connected to a transceiver, receiver or power amplifier.

After applying the operation voltage the system is operational already.

If an RF switched preamplifier is used, no wiring of the PTT control inputs is necessary, providing the transceiver is used that does not
exceed the power handling of the preamplifier relays.

The use of the PTT-control offers a further advantage of protection of the switch contacts in the changeover relays and the preamplifiers in use,

Switching to a different antenna connection is prevented, as long the PTT switch of the transceiver is active.